Seller: @MediaSoft
information about the seller and its items 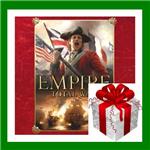 After payment You get an instant key Empire: Total War Collection in the STEAM and inclusion of all network functions.

Warning! This game is region-locked, it cannot be activated and played in Japan, North Korea, South Korea, Taiwan, China and Hong Kong.

Only here you will get a guaranteed gift for every purchase and review !!! And not just any cheap game like most sellers, and the game to choose from more than 20 offers !!!


OBLIGATORY: to recall not forget to write a request to obtain !!! Gifts are sent within 1-2 working days. Please check the spam folder, maybe our letter got there. Not participating resellers with a personalized discount of 5% or more.


In addition, we are launching a campaign for our loyal customers. For every 5 purchase of any goods made by the sellerMediaSoft, since 1 December 2011 the buyer gets to choose one of the games from the STEAM company "New Disc" and "1C": RaceOn, Lost Planet Extreme Condition, Prey, Scourge Project, Shatter. Cooperate, buy your friends and get your prize !!! The main condition - for all purchases you have to post reviews.


For any questions related to the holding of shares, please contact the seller. The shares are not participating resellers with a personalized discount of 5% or more. The number of keys is limited, the seller reserves the right at the end of promotional key to stop the action.


The famous series of Total War needs no introduction, for many years it has become a benchmark of quality in strategic genre. Its a new episode sets a new standard and represents a long-standing dream of all fans. Another historical era, even bigger battle treacherous enemies, and confusing plot - all this awaits you in the Empire: Total War!


For the first time in the history of the series Empire: Total War - GOLD Edition you become a member of this sea battle. Hundreds of ships slot boundless sea, facing each other in a grand battle. No less epic battle unfolding on the ground. Detachments of horsemen sweep slender ranks of infantry, and the next moment killed by artillery fire - Century "steam iron" brings about changes in military tactics. Battles have become more violent, and the increased need for diplomats. And terminate contracts, whipping a plot - to win all the good tools!


Evolution of the classics. Empire: Total War - a milestone in the history of the series in particular and the genre as a whole. You are waiting for incredible graphics and unparalleled breadth of hostilities: the best that was in previous episodes, are improved and completed!


Battleship! For the first time, the existence of Total War players can take part in full naval battles. By the beginning of your squadron of magnificent sailing ships will face in the implacable struggle against fierce enemy. All ships strictly abide by the laws of physics: the fallen Ray can kill unwary sailor, a loose piece of the shell to carry in chips easy craft. To choose the correct type of ammunition to win the decisive battle.


deliveryInstructions on how to activate the key:

If you have additional questions, please contact your dealer in online chat or send an e-mail.

Our other products - http://mediasoft.plati.ru </ delivery>